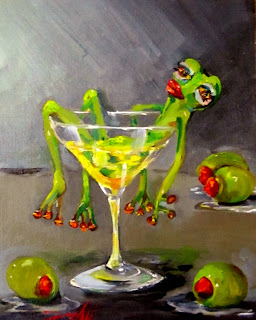 About This Painting: Leap year only come every 4 years so you need to celebrate if you finally get to have a birthday party or ask the one you love to marry you girls.

According to legend, girls can propose to their boyfriends on February 29th.
Snopes.com says this is a true custom known as "The Ladies Privilege" [The Privilege of Ladies]. Back in the thirteenth century a man had to accept a proposal on February 29th or pay a fine. This probably explains why so many men were off fighting wars at the end of February during a leap year.

It's based on the idea that February 29th is an unusual day and unusual things are permitted on that day only. One of the unusual things that is allowed is for women to propose marriage. Nowadays this is much more common on all the other days but apparently there was a time when only the man could propose marriage. I wonder what those times were like when men were in control?
So my little frog has gotten up the courage to make the leap.

"post your opinion in the comments" Or, send me an email
Thank You:

LOL. I enjoyed reading this post... I think I remember hearing about the proposal thing. Love the painting.

Thanks Wai Li, I like to have fun with some of my artwork.